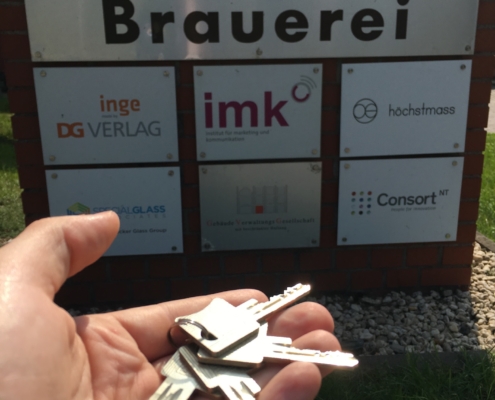 Agency höchtmass is moving. Many have already heard it, now it is decided. And signed. höchstmass will move to its new premises in September 2017. Not far from the old location, in the beautiful Wuth’sche Brauerei, the agency for event marketing moves into its new office. But until the time comes and the first projects at the new location can be discussed, a few more weeks will pass. Apart from the move itself, a number of installations and conversions are still necessary. So we have commissioned the very creative and talented interior designer Kristina from Tiny Interiours. She designed a concept for us to divide the existing space into four areas. The requirement was not to cover the striking brick wall.

In addition to the conceptual challenges and the extensive logistics that every move entails, there was another hurdle to overcome. In September, the 67th IAA took place in Frankfurt am Main. At this event, we were commissioned to take over the operational management of the stand for our client Maserati Germany and not only to cast and train the entire staff, but also to take care of them for the entire duration of the fair.